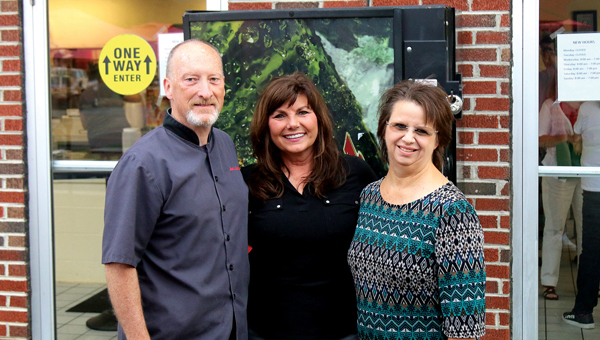 Star Photo/Nic Miller Bob's Dairyland President Joe Miller and his wife are accompanied by House of Representatives Congresswoman Diana Harshbarger after "Coffee With Your Congresswoman" on Wednesday morning.

For members of the community in Roan Mountain, Bob’s Dairyland has become a staple in the area as a place where one can feel welcome and enjoy a nice meal that can make someone feel the love that is cooked into it.

And while Bob’s Dairyland is well known by the people of Carter County as a great restaurant, the establishment is one that finds itself involved in many various aspects of the Roan Mountain community.

For example, early Wednesday morning, Bob’s Dairyland hosted an event that featured United States House of Representatives Congresswoman Diana Harshbarger for the first congressional district of Tennessee, an event titled “Coffee With Your Congresswoman” where members of the community could hear her speak and ask questions to engage in discussions with the politician.

This event was huge for the restaurant, as most politicians speak at other venues such as conference rooms and rallies. With the event featuring Harshbarger being held at Bob’s Dairyland, a sense of closeness and community was involved in every aspect.

President of Bob’s Dairyland, Joe Miller, spoke on this particular event, and other similar events that have been held in the past, saying, “Bob’s Dairyland has been here since the ’50s and it was named after Senator Bob Burleson, so this place has been a local center for things like politics for decades.

‘We always invite federal, state, and local politicians to come and speak here. They are always welcome, no matter what party affiliation or topic that they would like to speak on.”

Miller expanded on the event featuring Harshbarger, saying, “Her predecessor Dr. Roe has come by several times to speak, so we thought it would be a good idea for her to come speak. It helps that her field officer eats here frequently, so thanks to that we were able to connect and set this event up.”

Being able to have events like these are very special to Bob’s Dairyland, and Miller explained that, “It is always good for the people of the area to see our restaurant as a center for the community. We feel like we have been able to fill that role for many years. It goes as far as people using this building as a landmark when giving directions in Roan Mountain.

“It helps us establish that we are a focal point for the people of this community, whether it is political or just as a place to eat good food.”

Bob’s Dairyland has become a place of interest for not only those who want a delicious meal, but also for those who enjoy community events and hopes to continue to do so for years to come.

No end in sight… COVID numbers continue to escalate in region

BY IVAN SANDERS STAR STAFF ivan.sanders@elizabethton.com The news concerning the spread of COVID and how it is impacting Ballad Health’s... read more