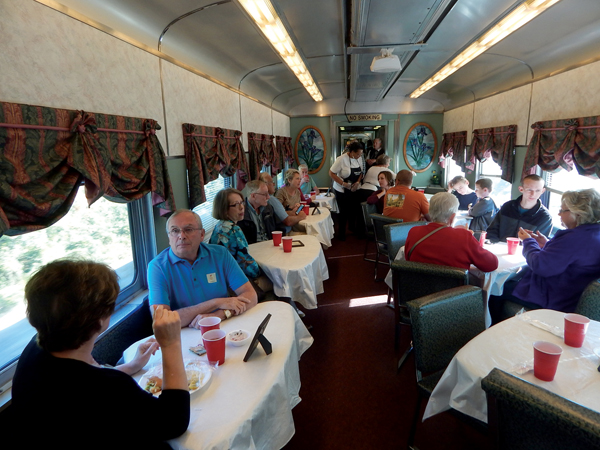 Local train buffs are in for a surprise when on August 14, the Watauga Valley Railroad Historical Society and Museum will partner with the Chuckey Depot Museum in Jonesborough for dinner aboard two restored railroad dining cars. In addition to dinner, there will be music and storytelling.

On Saturday evening, August 14, a special event will be held in Tennessee’s Oldest Town, Jonesborough, on restored historic vintage railroad dining cars. This event is a fundraiser for the Chuckey Depot Museum in Jonesborough. The highlight of the evening will be an elegant meal followed by stories told by an authentic railroad storyteller.  As guests arrive for dinner at the Railroad Yard, they will be greeted with railroad songs by the band “Trunk Monkeys”.
The Watauga Valley Railroad Historical Society & Museum (WVRHS&M), the town of Jonesborough, TN, and the Heritage Alliance have partnered to preserve the former Southern Railway train depot in Chuckey.
Built by Southern Railway in 1906 and privately leased in 1959, the depot was situated on land owned by Southern successor Norfolk Southern. After the lease expired, the latter planned to demolish the building. Instead, the building owners gifted the building to the Town of Jonesborough. The depot was moved from Chuckey to Jonesborough and restored to serve as a museum recognizing Jonesborough and Chuckey’s railroad legacy.
This unique fundraiser provides an opportunity for young and old alike to relive a bygone era by experiencing a meal in one of two elegantly restored railroad dining cars. The Moultrie reflects the golden years of passenger train travel. Originally owned by Atlantic Coast Line Railroad (ACL), it operated between New York and Miami, Florida until 1971. In 1971 Amtrak took over passenger train operations on the (ACL) and the Moultrie operated up to 1982. Purchased by the WVRHS&M in 1989, the Moultrie was mechanically upgraded and the interior restored.
The Clinchfield 100  began its long life in 1911 when it was built by the Pullman Company for the ACL as coach 964. In 1929 it was rebuilt as a dining car named the Orlando, it operated between Washington, DC and Miami for the next 40 years. It was purchased in 1951 by the Erwin, TN headquartered  Clinchfield Railroad and used as an executive car for another 32 years, including service on the locally famous “ CSX Santa Train” out of Kingsport, TN. The WVRHS&M bought Car 100 in 2013, completely restored it and renamed it the Clinchfield. In 2019, it once again served as the official Santa car on the CSX “Santa Train” after a 37-year absence. The Clinchfield 100 just turned 110 years old.
This is a casual dress event so everyone will be comfortable while eating and listening to the storytelling. Proceeds from the ticket sales help to fund new exhibits and new educational experiences at the Chuckey Depot Museum. In addition to permanent displays, the Depot Museum hosts two changing exhibits a year. The use of electronic kiosks is planned for expansion of our educational programming.
Tickets are $55.00 each per setting. The events will be held at 5:30 p.m. and 7:30 p.m. Saturday, August 14. Tickets are available by calling the Jonesborough Visitors Center at 423-753-1010 between 9 a.m. and 5 p.m. or stopping by at 117 Boone St, Jonesborough or order online at www.jonesborough.com/tickets.
There will be two menu options to choose from, including Option 1: Smoky Mountain Chicken, Green Salad with Dressing,  Rosemary Roasted Potatoes, green beans, and fruit cobbler; or Option 2: Vegetarian –  Cheese Lasagna, Green Salad with Dressing, glazed carrots,  green beans and fruit cobbler. You must pick a dinner option and setting time when you purchase your tickets. All tickets must be purchased in advance of the event. Refunds are not available.
Passengers may choose from true dining experience in the diners, four to a table or two to a table, parties of less than four in the dining cars are subject to assignment with other passengers.
Please note that both passenger cars were built before the Americans with Disabilities Act. Due to their historic significance and age, they are exempt from ADA Compliance requirements.Please consider suitability when ordering tickets. Due to limited parking at the rail yard in Jonesborough, all patrons will park at the Jonesborough Senior Center, 307 E Main St, Jonesborough, and be shuttled a very short distance to and from the dining cars at no charge.