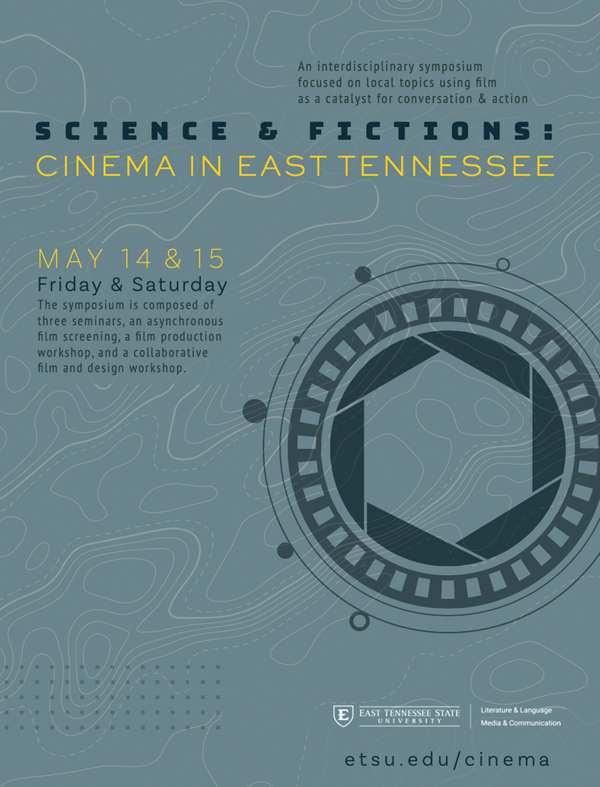 JOHNSON CITY — “Science and Fictions: Cinema in East Tennessee,” a virtual symposium presented by East Tennessee State University’s departments of Media and Communication and Literature and Language is scheduled for Friday and Saturday, May 14-15, via Zoom.

This free event is focused on artists, filmmakers, researchers and writers who will share insights on key topics for the region using film as a catalyst for conversation and action. It is composed of three seminars, an asynchronous film screening, a film production skills workshop, and a collaborative film and design workshop.

Online panels will engage interdisciplinary panelists around numerous topics, including “Storied Histories: Revisiting Appalachian Myths for the Future,” “Communicating Science: Media, COVID and Public Health” and “What Can Film Do Here?”

On Friday, May 14, from 10-11:30 a.m., “Storied Histories” will feature Elizabeth Catte (“What You’re Getting Wrong About Appalachia”), Ash-Lee Woodard Henderson (Highlander Research and Education Center) and Mimi Pickering (Appalshop), moderated by Wayne Winkler (“Beyond the Sunset: The Melungeon Outdoor Drama, 1969-1976”).

From 2-3:30 p.m., “What Can Film Do Here?” will feature Dr. Caroline Heldman (Geena Davis Institute for Gender in Media) and Bob Raines (Tennessee Entertainment Commission), moderated by Dr. Stephen Marshall (ETSU Department of Media and Communication).

“Film is growing in our area — not just as an industry, but in terms of community and culture,” said Dr. Chelsea Wessels, co-director of ETSU Center for Cinema’s film and media studies minor. “With the symposium, we wanted to create a space for forward-thinking dialogue, particularly thinking about the role film can play in this region to communicate and tell stories.”

“East Tennessee has little access to film culture outside of the AMCs,” said Holtmeier. “If there will be an opportunity to see a wider range of films in our region, it will only come through community support, like the non-profit cinemas that most cities have. With this event, we hope to begin growing such a culture in Johnson City and East Tennessee.”

The “Science and Fictions” symposium builds on work that Wessels, Holtmeier and colleague Shara Lange, associate professor and program head of ETSU Radio/TV/Film, have done in various projects at ETSU.

“Film is inherently interdisciplinary, so it’s a great way to bring people together to have conversations,” said Lange. “My colleagues in film studies did a great series, ‘The Appalachian Silent Cinema and Live Old Time/Bluegrass Screening Series,’ and the ongoing series hosted by the Mary B. Martin School of the Arts, the South Arts Southern Circuit Tour of Independent Filmmakers, has also cultivated engagement. In Radio/TV/Film, we have built a community around showing local films at our ‘Made in East Tennessee’ film festival and our series, ‘Tennessee Film Nights.’ So, in a lot of ways, this symposium brings elements of all of these projects together to engage our community with and around film.”

Organizers said they expect the symposium’s online format and regional emphasis will contribute to existing dialogue and cultivate new collaborations.

The public may sign up for these free panels and workshops by visiting etsu.edu/cas/cinema/events.php.