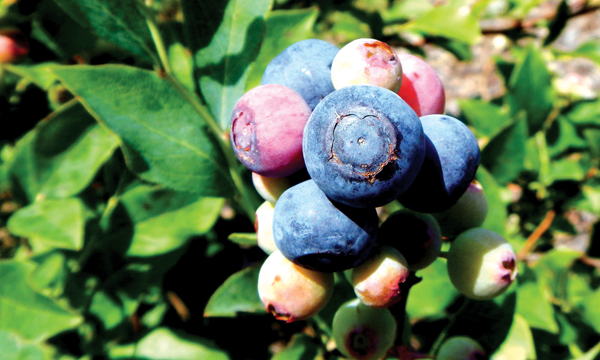 The various stages of ripening on this cluster of blueberries show the pink stage that give rise to the common name of rabbiteye. Photo courtesy E. Stafne, Mississippi State University.

Dependable and delicious rabbiteye blueberries are popular with home gardeners

BY CAROL REESE
UT EXTENSION SERVICE
The world of blueberries is populated by a diverse and colorful cast of characters. From pint-sized lowbush “wild” types with small, intensely flavored berries to medium sized highbush varieties with breathtaking fall foliage, to twenty-foot-tall thickets of fruit-laden rabbiteyes, the range of growth habits and characteristics is quite impressive. Tennessee has a handful of native blueberry species that thrive in the wild, mostly in mesic woodlands but the most popular for home gardeners are selections of Vaccinium virgatum (formerly V. ashei), commonly called rabbiteye, a species that hails from a bit further south. The name rabbiteye comes from the pink color of the ripening berry, which reminded someone of a pink-eyed rabbit. Like many common names, it is not entirely helpful for identification since most blueberries exhibit some pink during the course of ripening. Nevertheless, the name has a certain ring to it, and it has stuck.
Rabbiteyes are popular for home gardens in Tennessee because they are easier to grow. Compared to highbush types (V. corymbosum), they tend to be more tolerant of heat, drought and less-than-ideal soil conditions. All blueberries require very acid soil, with a pH range of 4.5-5.5. Rabbiteyes will tolerate the higher end of that range, even up to 4.8. Highbush blueberries are significantly more susceptible to stem blights that shorten their life spans, while well-sited rabbiteyes are extremely durable, often surviving for several decades, and they can grow so large that occasional pruning will be necessary to keep berries at picking height!
Be aware that a relatively new hybrid group called southern highbush are for the most part not well suited to the Tennessee climate. Blueberries, like many fruit crops, will bloom once they have satisfied the required hours of cold temperatures, called chilling hours. With a few notable exceptions, most southern highbush cultivars have low chilling hour requirements, making them prone to frost injury when they bloom too early in spring. Many of them are not sufficiently hardy enough to even survive cold Tennessee winters.
Rabbiteye blueberries are one of the easiest backyard fruits but only if necessary soil conditions are met. Good drainage is essential, as are soil tests to ascertain the crucially important pH range. If pH is too high, it can be adjusted with sulfur or soil amendments such as finely ground pine bark, but be aware that the pH can creep back up from surrounding soil properties if not addressed on a regular basis. It may be best to prepare a generous raised bed with an ideal soil mix.
Rabbiteye blueberries are naturally adapted to shade, but full sun is significantly better for maximum production. There is the potential for drought stress as the plants have a shallow and fibrous root system and benefit from shredded bark mulch on any site and supplemental irrigation. Do not apply manure. Blueberries are not tolerant of its alkaline properties.
Rabbiteye blueberry plants will produce new stems from the root crown, eventually making a substantial multi-stem shrub. These new stems make good replacements for those that have become less productive as they age, so after a few years of establishment, it is beneficial to remove those older stems to open up the shrub to more sunlight. Ideally, this is done just after harvest, before it begins to set fruiting buds for the following season. The plants may certainly be pruned during winter if that is more convenient, but some berry production will be sacrificed. Berry size, however, may improve.
More than one variety is recommended for pollination. Consider spreading out the picking season by planting early- and late-ripening cultivars. ‘Premier’ and ‘Tifblue’ should give you 6- to 8-weeks of fruit ripening (from mid-June through mid-August) and are widely available. ‘Titan’ is a newer form for early season, worth hunting down as it is reported to have a very large berry, as is another early ripener called ‘Vernon’.  ‘Ocholockonee’ is another recent offering that extends late season harvest, has larger berries than ‘Tifblue’ and a delayed spring bloom that may help avoid frosts.
It is far too common to see inappropriate selections offered, especially in big box store garden centers that pay little attention to regional recommendations. Do be aware that rabbiteyes are not reliably hardy in the coldest parts of Tennessee where winter temperatures can dip several degrees below zero. Highbush will survive in these colder regions.
Besides the aforementioned recommendations, there are many other rabbiteye cultivars that will be good candidates for the home orchard or edible landscape.
You Might Like

What should you look for in a hand sanitizer?

BY ASSOCIATED PRESS Question: What should I look for in a hand sanitizer? Pick one that contains mostly alcohol, and... read more