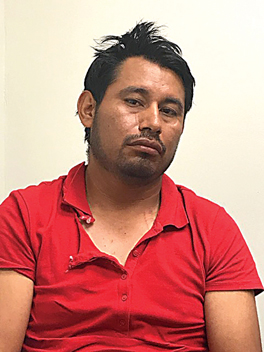 CROSSVILLE — A joint investigation by Special Agents with the Tennessee Bureau of Investigation, the Crossville Police Department, and the 13th Judicial District Attorney’s Office has resulted in the arrest of a Crossville man in connection to the death of his wife.
At the request of 13th District Attorney General Bryant Dunaway, TBI Agents joined investigators from the Crossville Police Department and the District Attorney’s Office in investigating the death of Sante Cecilia Amrvocio Mendez. On Sunday morning, officers responded to the 100 block of Village Lane, after dispatchers received a 911 call in which the caller hung up. Upon arrival, the victim’s body was discovered in a wooded area behind an apartment complex. During the course of the investigation, authorities developed information that identified Rony Noe Ambrocio Cruz, 33, the victim’s husband, as the individual responsible for her death.
On Sunday afternoon, Cruz was charged with one count of first-degree murder. He’s being held in the Cumberland County Jail without bond.
You Might Like

Lucky No.7: Taylor Swift nabs 7th No. 1 album with ‘folklore’