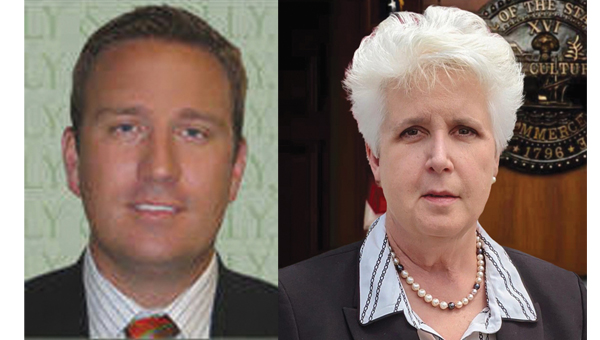 The position of Elizabethton’s City Judge is one that is not highly publicized, is on the ballot every four years, and doesn’t pay a lot of money. Also, it doesn’t handle a lot of high profile cases.
However, in this week’s general election, two people are seeking the job to fill the unexpired term of former Judge T.J. Little, who died earlier this year, causing the vacancy. They are Teresa Murray Smith, an attorney and former assistant in the District Attorney General’s Office in both the First and Second Districts, and Jason Holly, who is waging a write-in campaign. Holly is presently serving in an interim role. The position will be on the ballot again in November when a candidate will be selected for a full four-year term.
Holly was sworn in as interim judge of the Elizabethton Municipal Court in February of this year. There were four other candidates for the position — Mark Dugger, Collins Landstreet II, John W. Walton, and Smith.
The job pays $15,500 a year, and most of the cases brought before the court are code violations and traffic code violations. At the most, court is usually held about two days twice a month.
Smith opined that she and the other candidates for the interim position did not get a fair shake from City Council when an interim judge was selected. “I feel that the decision was made prior to the open meeting,” Smith said.
Holly in an interview admitted he was approached by Council about filling the interim position. His uncle, Kim Birchfield, is a member of City Council.
He said he did not qualify for the August election because his intentions were to wait and run for the full four-year term in November. However, Smith qualified for the August election forcing Holly to wage a write-in campaign.
Smith is the daughter of the late Harry “Sonny” Murray and Sarah Robinson Murray. Her father for a number of years served as Elizabethton’s assistant police chief. He also served as Safety Officer and Building Inspector. Her mother was a respected nurse in the community.
“I have always been interested in government, especially law, history, and politics,” Smith said.
She spent 30 years working as an assistant prosecutor for the state. Smith said the vast majority of the cases she worked involved families and victims of crime.
Smith is a graduate of Elizabethton High School and East Tennessee State University, majoring in history and political science. She earned a law degree in 1977 from the University of Tennessee and was admitted to practice law in Tennessee in 1978, and has maintained a law license ever since.
She practiced law for a short period before being appointed an assistant District Attorney General by the late Hon. Lewis W. May, then the District Attorney for the First Judicial District. Smith served in that position until 1998 when she accepted a position as an Assistant District Attorney for the Second Judicial District (Sullivan County). She served in that position until she retired in 2008.
Smith is married to Lanny D. Smith, a former special agent with the Federal Bureau of Investigation. Upon his retirement he became a faculty member of Northeast State Community College, retiring recently. Lanny has a daughter, and he and Teresa are grandparents to two grandsons and have a great-granddaughter.
“I decided to run because I wanted to serve my community and give back to it. Elizabethton has been good to me and my family,” she said.
Holly, like Smith, has deep ties to the community. He, too, is a graduate of Elizabethton High School, graduated from the University of Tennessee and the Cumberland Law School in Birmingham, Ala., in 2000.
He was a founding partner with the Elizabethton law firm of Holly & Holly. He now practices alone and his office is located at 711 E. Elk Avenue. He handles a variety of litigation matters, ranging from criminal defense, family law, personal injury/auto liability, general civil litigation, and juvenile court matters.
Holly said he sought the job because of his love for Elizabethton, and his respect for his predecessor, T.J. Little.
He and his wife, Leanne, are parents of two sons, both of whom played football at Elizabethton High — Jaxton and Braden. A daughter, Madison, is also a student at Elizabethton High School.
“I am totally bought in to orange and black,” Holly said, noting that he is PA announcer at Elizabethton High School football games.
Holly is also a deacon at First Baptist Church, Elizabethton.
He said because the main election is in November, he had decided to focus on that election, but when Smith announced to fill the interim post in the August election, he was forced to do a write-in candidacy.
Elizabethton’s General Election is Thursday, August 6. The winner of the City Judge contest Thursday will serve until November, when a contest will be held to fill the full four-year term.
You Might Like

BY IVAN SANDERS STAR STAFF ivan.sanders@elizabethton.com Many have taken notice of all the busy work going on at the former... read more