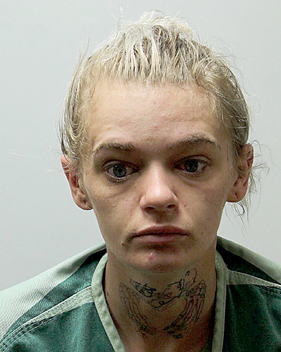 Woman arrested for possession of 70 grams of meth

Deputies of the Carter County Sheriff’s Office arrested a woman after a traffic stop led to the discovery of 70 grams of methamphetamine Monday.
Autumn Pamela Bradshaw, 24, is charged with possession of methamphetamine and failure to appear in court. The charge came after a deputy conducted a traffic stop on a vehicle with an improper license plate. The deputy ran a K-9 around the vehicle, and the dog alerted to the presence of narcotics in the vehicle. Deputies then searched the vehicle and found methamphetamine in Bradshaw’s purse and in the area where she was sitting, totaling about 69 grams. She was also found to have an arrest warrant for a failure to appear.
Bradshaw was then escorted to the Carter County Detention Center, where deputy jailers found another gram of an unidentified substance on her person. Bradshaw is being held on an $8,000 bond.
You Might Like

Humble beginnings led one man to achieve his American Dream…now, he wants to share it by running for Congress. Josh... read more