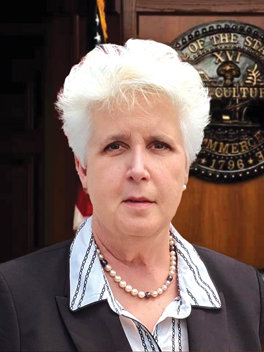 Teresa Murray Smith is today formally announcing her candidacy for the position of Elizabethton Municipal Judge.
The position was declared vacant with the untimely death late last year of Judge T. J. Little.
Smith, a native of Elizabethton, is the daughter of the late Harry E. (Sonny) Murray, a longtime Elizabethton City employee, serving as a police officer and as Safety Officer & Building Inspector, and Sarah Robinson Murray, a respected nurse in the community. Smith received her education in the Elizabethton City Schools, and graduated from Elizabethton High School in 1971. She attended East Tennessee State University, majoring in both History and Political Science, graduating with honors in 1975. She earned a law degree (Doctor of Jurisprudence) in 1977 and was admitted to practice law in Tennessee in 1978 and has maintained a law license ever since.
Smith first began practicing law in Elizabethton as a solo practitioner. Soon after, she was appointed as an Assistant District Attorney General by the late Hon. Lewis W. May, then the District Attorney for the First Judicial District, which includes Carter County. “I served the people of this area of the state in such position until 1989, when I accepted a position as an Assistant District Attorney for the Second Judicial District (Sullivan County), with Hon. Carl K. Kirkpatrick, District Attorney General. I continued with that office until my retirement in 2008. I lived in Elizabethton until 1991, when required to move to Sullivan County as a condition of my employment in the District Attorney General’s office. After my father died in 2004, I assisted my mother maintaining the family home in the Southside community,” Smith said.
Smith is married to Lanny D. Smith, who is a former special agent with the Federal Bureau of Investigation. Upon his retirement he became a faculty member of Northeast State Community College, retiring recently. The couple are active members of Saint Peter the Apostle Anglican Church, a traditional congregation here in the Tri-Cities.
“We enjoy being grandparents to two grandsons and now a great-granddaughter. In 2015, my husband and I decided to move back to Elizabethton, to the family home. I became the fourth generation of the Murray family to reside in the house built in 1915 by my great-grandfather, Matson Murray. Since returning to Elizabethton, we have been working hard to improve the residence and the land surrounding it, as well as becoming active in the community and renewing many old acquaintances and making new friends,” said Smith.
In announcing her candidacy, Smith said, “I have always worked hard, first to obtain my education, then to practice the type of law in which I was most interested, that of providing service and safety to the citizens of this community and state. I have always maintained a reputation of exceptional legal ability and ethical standards. I passionately believe that those in positions of public trust, such as elected or appointed offices, owe a duty to the public to not only behave in an ethical manner but also to be diligent in their work in the office they hold. I intend, should I be elected, to maintain that same work ethic and responsible behavior to the office. That is why I believe I am the candidate with the background of service and the legal experience who is most qualified for the position of Municipal Judge,” she said.
You Might Like