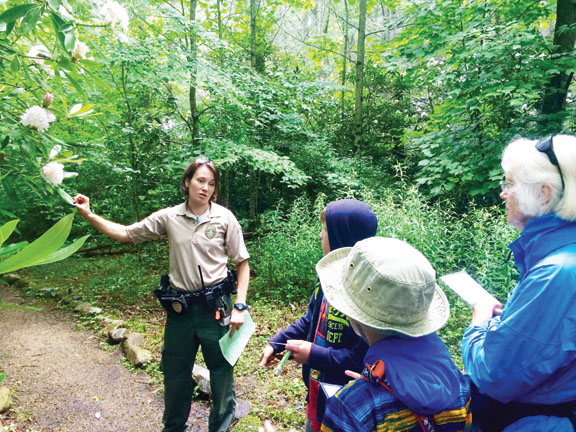 A nature trail may seem like an unusual locale for a friendly game of bingo, but Roan Mountain State Park Ranger Meg Guy begs to differ. Not only is her Peg Leg Mine Trail game a unique way to spend a couple of hours in nature, it is also a  path to learn about the diverse foliage that calls the park home.

“I can’t take credit for the game,” said Guy, in her fifth year as a Roan Mountain ranger. “I stole the idea from my friend who works at Meeman-Shelby Forest State Park in Memphis.” The idea may have originated in West Tennessee, but Guy has made it her own in the Northeast corner of the state.

How it works: Each competitor is given a pen and a typical bingo card. Instead of numbers, the card contains the names of 25 plants, five rows with five plant names in each row. As the trail unfolds, so does the game with an amazing amount of plant diversity along the 0.3-mile trail. Guy stops often to describe a plant and asks for guesses as to its identity. The winner, of course, is the first to get plant bingo.

When she launched the trail game, she first tried it without cards. She discovered that didn’t keep all participants interested.

“I added cards to keep the kids’ attention,” she said.

Two such youngsters hit the bingo trail on a recent drizzly morning. Twelve-year-old twins Mason and Jay Kirchner were eager to get the game going. They and grandparents Frank and Jane thought trail bingo would be a fun way to launch their park day. The Nashville family was vacationing in the park, a permanent lifestyle according to Frank.

“We’re retired, so we’re always on vacation,” he said with a laugh as the four took to the trail.

The first stop was at a flowering dogwood, past its early spring flowering season. Guy earned a couple of eye rolls as she revealed the tree’s identity. “This is where the bad park ranger joke comes in,” she said. “It’s a tree known by its ‘bark.’ ”

The next plant turned out to be the dreaded poison ivy as Guy hit the familiar rhyme of “leaves of three, leave it be.” She was careful not to touch the plant but did touch upon its value, as it is not as troublesome for nonhuman forest creatures. “Poison ivy berries provide food for lots of different birds, especially bluebirds.”

The plant-naming ritual continued as the trail wound on. From holly defense systems to a type of moss once used in homemade diapers (sphagnum moss is quite absorbent) to rhododendron maximum, the game and the lessons continued. Guy also pointed out several edible plants, wood sorrel being of particular interest because of its lemony taste.

She also gained intrigue when pointing out jewelweed growing just a few inches from poison ivy. The plant can be formed into a salve to ease ivy’s itch. Jewelweed’s name derives from the diamondlike appearance of water when it beads on the plant.

The competition increased through 20-plus plant species, with nothing more to be heard than the crunch of the trail underfoot and the occasional “Did you get that one?” as the cards were eagerly marked. When Guy paused to identify showy orchis at the base of a tree, the excitement reached its peak. Mason’s call of “Bingo!” echoed through the forest.

Even though a winner had been crowned (Mason’s crown being a shiny pair of state park-themed sunglasses), Guy continued to identify more plants as the trail wound back to its visitors center starting point.

As the victorious Mason skipped along the last bit of trail, his keen eye caught one last bit of forest life. “Anybody have snail on their card?”

Trail bingo is just one of an ongoing series of summer activities at the park. For a complete list of fun Roan adventures, visit http://bit.ly/1IN732c.

Don Armstrong is a mass communications professor at ETSU and adviser to the East Tennessean, ETSU’s student newspaper.

Fawns found in the woods are more than likely not abandoned, according to a TWRA official. The recent spike in... read more