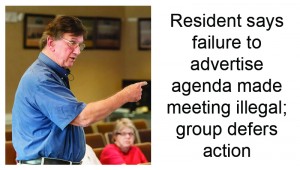 The Elizabethton Historic Zoning Commission meeting ground to a halt Monday when the meeting’s legality was questioned.
Elizabethton resident Tom Cowan interrupted the meeting, telling commissioners they did not have the jurisdiction to make decisions because a proper notice was not given under the state’s Sunshine Law.
At last month’s meeting Cowan, who owns property in the historic district, delayed a vote on a certificate of appropriateness for the new Covered Bridge Park stage after objecting to the time frame for the application for the certificate. At that meeting, Cowan said the city failed to meet a requirement that all applications for such requests be filed 21 days before they are heard by the commission.
At this meeting, Cowan waited to raise his objections to the legality of Monday’s meeting until after the commission had already voted on the first item of new business on the agenda – a certificate of appropriateness for repairs to the home located at 804 Hattie Ave. The certificate was unanimously approved.
Once the commission moved on to the second item of business – the certificate of appropriateness for the stage in Covered Bridge Park – Cowan questioned whether the meeting was legal.
Cowan’s main concern was that the agenda for the meeting was not published in the legal ad that ran in the Elizabethton Star on Aug. 13.
“The notice doesn’t mention either of the things that you have taken up tonight,” he said.
He informed the group that many cases had been through the appellate court system that agreed that not publishing an agenda was the same as not giving adequate notice.
Commission chair Sarah Baker asked city attorney Roger Day for clarification concerning the commission’s requirement to publish an agenda.
Day advised her that when the meeting is advertised, the agenda has to be announced as well.
He added that city council publishes its agenda, with the notice that the agenda can be changed due to time-pressing items that need approval.
Commissioner Helen Wilson said she had always been under the impression that once the meeting was advertised, with the notice that an agenda was available for review, that the commission had done their due diligence.
Baker said that both the stage approval, and the historic district expansion – the final item on the agenda – were both postponed from last month. She asked if that would constitute notice, but Day said it would not.
Cowan warned the commission that if it went ahead with the vote after being notified that the meeting was not legal, the decision could lead them to appear in court.
“The public doesn’t know what is happening,” Cowan said. “I am trying to be legally correct and it seems like I’m the only one.”
Day urged the commission to “err on the side of caution” and postpone a decision until the September meeting to allow for the agenda to be published. He said it would be “easier to save 30 days on the front end” than to have to go through a long court process.
Wilson said the commission had not published agendas before, but if it is required by law that it was something they should do.
Day told the commission if they published with a 10-day notice, then they should be within the requirements of the law. He stressed the importance of adequate notice so decisions could not be called into question later by residents who said they were not aware or notified of the meeting.
Wilson made a motion to postpone the remaining business until the September meeting, and for the agenda to be published for all future meetings at least 10 days in advance. The motion was unanimously approved.

Photo by Abby Morris-FryeMembers of the Election Commission voted to certify results of the Aug. 7 election during the commission’s... read more