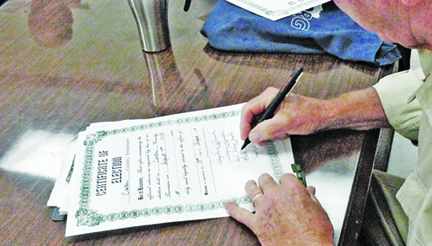 Photo by Abby Morris-Frye
Members of the Election Commission voted to certify results of the Aug. 7 election during the commission’s meeting on Monday. Members signed certificates of election for each person elected to a county office.

While wine sales could be in the future, the August election is officially in the past.
Signatures were the theme of Monday’s Election Commission meeting as members signed and certified the results of the August election and discussed the petitions which will allow the issue of selling wine in local grocery stores to come to a vote.
Members were updated on the wine referendum – an issue to be decided on by voters living within the Elizabethton city limits.
As of Friday, the Commission had just enough certified signatures to put grocery store wine sales on the November ballot.
To get on the ballot, the petitions required 355 signatures from registered voters living in the city limits — a number of voters equal or greater than 10 percent of the registered voters casting a ballot in the last election for governor in the city.
By Friday afternoon, 356 signatures had been verified.
The election office began receiving the petitions in June to verify signatures. However many of those signatures weren’t countable because those who signed were either not registered to vote or didn’t live within the city limits, according to Administrator of Elections Tracy Harris.
In March, Gov. Bill Haslam signed into law a bill authorizing local option referendums to permit the sale of wine in retail food stores. Under the law, only those municipalities that had already approved allowing retail package stores or liquor-by-the drink establishments or both could pursue the local option to allow wine in grocery stores.
If the referendum is approved on the Nov. 4 ballot, grocery stores in Elizabethton could begin selling wine — but not right away.
Stores seeking to sell wine would first have to apply for the appropriate permit through the Tennessee Alcoholic Beverage Commission.
Under the terms of the law signed by Haslam, the commission “will not issue any retail food store wine licenses prior to July 1, 2016, although the commission may begin processing applications prior to that date. Prior to July 1, 2017, no retail food store wine license will be issued to any applicant for a location that is within 500 feet of an existing retail package store licensee, unless the licensee consents to the issuance of the license.”
The election commission also finalized canvassing and auditing the election results; the final step in the process is for the results to be certified and signed by the commission. Commission member Wayne Smith made a motion to accept and certify the results and the motion was seconded by member Miller Garland and passed unanimously.
Members of the commission then signed the official results to be sent to the state, and also signed certificates of election for each of the individuals who were elected to county government positions.
Commission member Bud Whitehead said he was pleased with the voter turnout for the August election, which saw 49 percent of the county’s registered voters head to the polls. Harris said the turnout for the county’s general election was comparable to turnout numbers normally only seen during presidential elections.