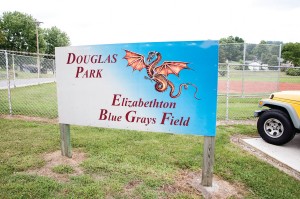 A simple field with a complex history has won official recognition as a historic landmark.
The Blue Grays Field – one time home to Elizabethton’s black semiprofessional baseball team – was awarded the designation of a local historic landmark by City Council at its Thursday night meeting.
Now a part of Douglas park, the field was the Blue Grays baseball team’s home field from 1935 to 1955. The Blue Grays were a barnstorming team, meaning they traveled throughout the South playing road games.
“The city of Elizabethton has a very powerful and unique place in history regarding the era of the Negro Leagues and independent barnstorming teams,” said Cedar Grove Foundation Director Jacey Augustus. “It is of the utmost importance to protect it. We are the only town in the area who can lay claim to being the home of a semi-pro Negro league team.”
The Blue Grays had players from Elizabethton, Johnson City, Kingsport, Bristol, Greeneville and other areas in surrounding states.
“It is very important to keep the field safe,” Augustus said. “It is a piece of history.”
Augustus said the Cedar Grove Foundation, along with other volunteers, supporters and Blue Grays family members had been working for 13 years researching the history of the team, and then worked for 10 years to gain a historic designation for the field.
The field is behind the Elizabethton City Schools administration building; the historic designation extends only to the area where the ball field used to be.
Augustus pointed out the field had historic significance to the Cedar Grove community beyond being the Blue Grays’ home field.
She said the area was originally covered in cedar trees before it was cleared to be a ball field, which is where the community got its name. Also, the area was the meeting place for the fraternal order of the Knights of Pythias.
“Most people are used to the community being called the ‘Douglas Community’ but that’s not the original name,” Augustus said. “The fraternal order of the Knights of Pythias originally held meetings in the 1800s on the Blue Grays baseball field, when it, along with entire community was completely covered with large cedar trees, hence the name ‘Cedar Grove Community’.”
Augustus added that the community was named by both enslaved and freemen, along with enlisted United States Colored Troop soldiers from the Civil War.
“One of soldiers involved in the name process was the brother of Josephine ‘Aunt Jo’ Taylor,” she said. “She, at one point, was a slave owned by Bob and Alf Taylor.”
Augustus said the Knights of Pythias was established and held its original meetings on the field that would become the playing spot for the Blue Grays.
She said the Colored Troop soldiers were denied membership to the white Knights of Pythias, so they established and incorporated their own to “offer a mission of friendship, charity and benevolence to the community and their Civil War soldiers.”
They would later build a small building on South Lynn Avenue to host meetings.
Now the field is frequently used by families in the community and by local ball teams, Augustus said – something that mirrors the use of the field by the community as far back as the 1800s.
“The field has always served as a meeting place for the community,” she added. “It was always common for picnics and baseball games to be held there as a way for the community to socialize, especially after church.”
Augustus said receiving the historic designation would help protect the field from “treasure hunters” and would help keep the history of the field alive.
“It will allow the City of Elizabethton to proudly take their place in the history the Negro Leagues and Independent barnstorming teams who paved the way for Jackie Robinson and others,” she added. “The Blue Grays Field continues to serve as an integral part of the community and is highly utilized for family and community recreation. It was important in the past and its important for the future.”
The Blue Grays Field is now a part of Douglas Park in the Elizabethton City Park system.

Will history be made Monday night? Or at least expanded? After reaching out for input from more property owners, the... read more