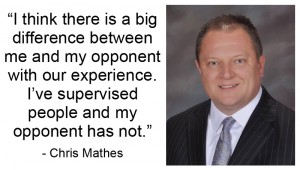 Employee retention is one of the biggest challenges to law enforcement in Carter County, according to current Sheriff Chris Mathes.
“Being able to recruit good people and being able to keep them and keep up with surrounding agencies is financially difficult,” said Mathes, who is running a write-in campaign in Thursday’s election to retain his position of sheriff after losing the Republican primary in May.
According to Mathes, employee retention is hampered by the fact the Carter County Sheriff’s Department is one of the lowest-paid law enforcement agencies in the area.
“You are starting with young people and by the time you get them to where you want them to be, they leave and you have to start over,” he said. “You are always constantly training. You can’t buy experience most of the time.”
Mathes said he has concerns regarding the employee turnover rate of the department, which he described as a “revolving door” situation, but said he is not sure what the county can do at this time to help solve the issue. He said increased pay for the officers could go a long way toward solving the problem, but with the economy in its current state, additional funding could prove to be a hardship for the county.
“I would love to see a pay scale to improve longevity,” he said, adding that the pay scale should include step raises for employees based on length of service. The Sheriff’s Department previously had a step raise plan, but Mathes said the employees have not had such a plan since prior to his election to the office.
Any change to employee pay would have to be approved by the County Commission, Mathes said.
“We will see what the new commission does with budgets,” he said, adding he feels the Commission should look at a long-term strategic plan for employee salaries. “It can’t be one year at a time. You have to plan to build schools and you have to plan for your employees,” he said.
The financial stability of the county would have to be considered before any change in pay, Mathes said, adding he feels the county’s current debt obligations would impact any financial decisions made by the county.
“We are kind of at the mercy of the rest of the economy,” he said. “We are going to have to manage with what we’ve got for a while.”
If re-elected, Mathes said he plans to continue combating drugs and drug trafficking in Carter County.
“My main focus has been for eight years and will continue to be shutting down drug trafficking,” he said. “I think drugs are our number one problem.”
Mathes touted the number of drug cases prosecuted by the department under his administration and his creation of a drug interdiction unit within the department as evidence he has taken a hard stand against drug trafficking.
“From 2009 through 2013 we’ve put more meth charges on people than anywhere else in the state,” he said, adding that in addition to prosecuting drug cases in the local court system his officers have taken drug cases through the federal court system. “We have not looked the other way, we’ve went after drug dealers aggressively,” he added.
Mathes said he keeps up with drug trends and trafficking news from around the country to stay on top of the situation. He cited incidents where professional athletes have faced drug charges for not only illegal drugs but also steroids. He called this trend among athletes disturbing because of the message it could send to children.
“I have a 5-year-old son and I will do anything and everything I can to keep him and other children from even having access to (drugs),” he said.
If re-elected, Mathes said he would like to continue the work he’s been doing to improve the department and serve the citizens of Carter County. “I feel like we have accomplished so much over the last eight years,” he said, adding he would strive to continue that success and to build upon it.
According to Mathes, his experience in law enforcement and as sheriff will benefit both the department and the citizens.
“I think there is a big difference between me and my opponent with our experience,” he said. “I’ve supervised people and my opponent has not,” he said, adding he also holds the experience edge in operating the county’s jail as well as developing the department’s budget and operating under it.

Where do I vote?

Where do I vote? A quick look at precincts and commission districts: FIRST DISTRICT Hunter Precinct: voting at Hunter Elementary... read more