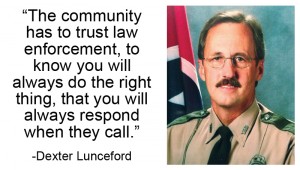 Trust.
That one word is what Dexter Lunceford used to describe the biggest challenge facing law enforcement in Carter County.
“The community has to trust law enforcement, to know you will always do the right thing, that you will always respond when they call,” said Lunceford, who is the Republican nominee for sheriff in the county’s general election on Thursday.
“To be successful in law enforcement you have to have the community’s help and support,” he added. “You can’t put a police officer on every corner, so the citizens of this county have to know they can report crimes — anonymously if they wish — and you will respond.”
Lunceford said trust is not just important for the relationship between the department and community, he said it is also vital to the relationship between the department and its employees.
“The employees have to trust they will be treated fairly,” he said. “Holding them accountable for what they do and praising them for a job well done.”
Trust is essential to having a good law enforcement agency, Lunceford said. “With that trust and building that rapport you can solve crimes and begin to prevent crimes,” he said.
That same principle, Lunceford said, will assist him in working to reduce the employee turnover rate of the department.
“Most of those officers do a good job and they want to be told they are doing a good job,” he said, adding employees cannot thrive at work “when they are constantly under stress.”
Building trust and “treating people with respect” will help the department retain officers Lunceford said, as will his plans to reinstate step raises for employee longevity.
“You shouldn’t start out today with the same pay as someone who has been there 10 years,” he said. “Pay increases, building trust and treating people with respect, I think those things will greatly reduce the turnover rate within the department.”
Lunceford said, if elected, he plans to institute a staffing study of both the patrol and corrections divisions.
“I will place people in the positions I think they will do the greatest good,” he said. Lunceford said the staffing study will also allow him to evaluate the number of supervisory positions versus the number of positions they supervise.
“Right now you have 26 people supervising 10,” Lunceford said. “That puts an unfair workload on those 10 officers who are out there doing the patrol workload.”
Lunceford also has plans to put together “an administrative staff of local, experienced personnel” to work with him to improve the department.
If elected, Lunceford said he would reopen partnerships with other area agencies and reinstate programs which had been cut but which he feels are beneficial to the county and its citizens. He said drug activity is a big issue and most criminal activity can be traced back to drugs in some way.
“The current administration dropped the K-9 program, which is a very effective tool in detecting narcotics. He removed the D.A.R.E. (Drug Abuse Resistance Education) program from the schools,” Lunceford said. “(Mathes) chooses not to participate in the Drug Task Force. He chooses not to participate in the DEA’s local task force.
“I plan on reversing that and participating in all those programs, again with reassignment of personnel, not with new money,” he added.
Lunceford said he believes his experience will assist him in running the Sheriff’s Department.
“I’ve got over 30 years experience in military and law enforcement,” Lunceford said, citing his work with a city police department, a county sheriff’s department and the Tennessee Highway Patrol. “I don’t think anyone would doubt the professionalism of the Tennessee Highway Patrol. I plan on bringing that professionalism to the sheriff’s department.”
He referred to criticism he has received due to not obtaining a college degree.
“I am educated, but education alone will not determine whether or not I will make the people of Carter County a good sheriff,” Lunceford said. “What will determine that is my ability to understand what the people of this county want and need from their Sheriff’s Department and using my 30 years experience to provide them with the best Sheriff’s Department we can have while holding the line on spending in order to meet their needs.”

Employee retention is one of the biggest challenges to law enforcement in Carter County, according to current Sheriff Chris Mathes.... read more