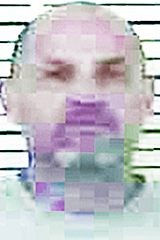 A report that a truck was missing led to theft charges against one man – and the arrest on a warrant of the man who made the report.
The investigation began early Saturday when Jody Bush, 220 Lovers Lane, called the Carter County Sheriff’s Department to report that his 2008 GMC work truck from Summers-Taylor Inc. was missing from his driveway.
According to a report from CCSD Deputy Christopher Reichenbach, Bush last saw his truck in his driveway at 11:15 p.m. Friday, and found it was missing at 5:10 a.m. Saturday.
After speaking with Summers-Taylor, the company was able to track the truck using GPS and found it was on the Elizabethton Highway traveling from Johnson City toward Elizabethton.
At this time, the EPD was notified to be on the lookout for the truck. EPD Officer James Sexton found the truck traveling east on West Elk Avenue and tried to stop it near Domino’s Pizza.
Sexton wrote in his incident report that the driver, who was later identified as Kenneth Edward Arnold, 49, 190 Lovers Lane, did not stop despite the officer using lights and siren. Two more officers joined in to try to stop the truck, which eventually pulled over at Tri-Cities Gun Depot.
Arnold was arrested by the EPD and charged with possession of stolen property, evading arrest and on a warrant charging him with violation of probation.
Later, he was also charged with theft of property over $10,000 by the CCSD. In his report, Reichenbach said Bush noticed that a Wacker Plate compactor, a leaf blower, phone charger, computer charger and $8 were missing from the truck.
When Bush met with the CCSD to speak about the property from the vehicle, he was also arrested, on an outstanding warrant charging him with failure to appear.